Ayahuasca in its most basic form is a combination of two plants; the banisteriopsis caapi vine and the leaves of the chacruna plant, psychotria viridis. This unique plant combination is not a random coincidence, but rather, it is an elaborate mixture that unlocks the power of both plants.

There are two aspects that are often associated with an ayahuasca diet. The first one is the aspect of purity. Traditionally, shamans and apprentices abstain from spicy and heavily-seasoned foods, excess fat, salt, caffeine, acidic foods (such as citrus) and sex before and after an ayahuasca session. Avoiding these foods is thought to calm the mind and conserve energy for the journey.

The second dietary consideration stems from the interaction of tyramine with MAOIs, which are reported to cause a hypertensive crisis when combined. However, many ayahuasca groups such as the União do Vegetal in Brazil do not follow any dietary restrictions, suggestion that the risk is much lower than previously thought. In fact, psychedelic researcher Jonathan Ott wrote in one report on Pharmahuasca:
„I have personally tempted fate, and ingested cheese, beer, chocolate, caffeine, nuts, dried fruit, etc. in the afterglows of my pharmahuasca and anahuasca experiences, with no ill effects whatever.“ 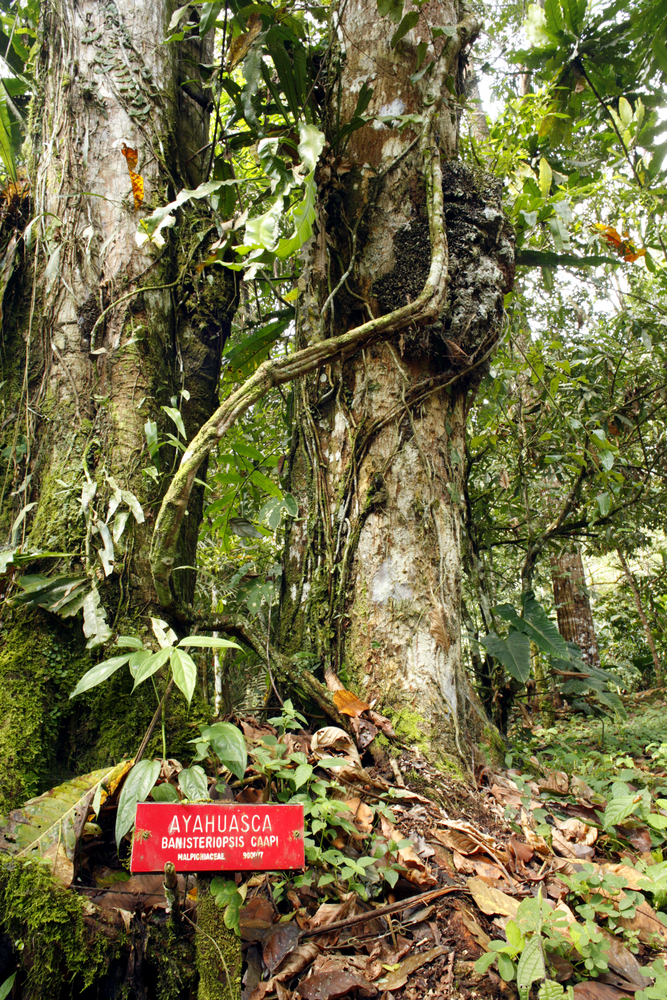 The DMT provided by the psychotria viridis leaves is not orally active because of so called MAO enzymes. Located in our guts, these enzymes break down the DMT before it enters our bloodstream. In the ayahuasca brew, the banisteriopsis caapi vine provides MAO-Inhibitors (MAOI), which temporarily and selectively suspend the barrier provided by these enzymes, and allow the DMT to be absorbed.
MAO stands for Monoamine Oxidase; two enzymes, MAO-A and MAO-B, are found naturally within the human gastrointestinal tract. The MAO barriers are a safety mechanism that protects us from a range of mildly dangerous foods. For example, without those enzymes a slice of aged cheese might just knock us out.

While Ayahuasca is often said to be a MAO-Inhibitor, more precisely is it actually a RIMA – a Reversible Inhibitor of Monoamine Oxidase. There are some significant differences between a MAOI and a RIMA. First of all, MAOIs last much longer; pharmaceutical MAOIs tend to have a duration of a few days to a few weeks. RIMAs, on the other hand, only last a few hours after ingestion. Also, the RIMA mechanism of ayahuasca shows a more selective inhibition process than its synthetic counterparts. These differences explain why there are no known fatalities caused by ayahuasca, as opposed to the occasional deaths caused by synthetic MAOIs drugs.

Further, evidence shows that the harmala alkaloids of ayahuasca act only on MAO-A, in a similar mechanism like Moclobemide, an anti-depressant that does not need dietary restrictions.

A lot of foods contain the amino acid “tyramine”. A certain amount of tyramine is not a problem for our system. But if the MAO enzymes have been inhibited, tyramine can be freely absorbed in amounts larger than what the body can handle. As tyramine enters our system, it displaces stored adrenaline from the adrenal glands. As adrenaline is dumped into the blood stream, it can lead to a hypertensive crisis which in turn can cause severe headaches, heavy sweating, dilated pupils, a stiff neck, heart palpitations, increased blood pressure, and in some severe cases, cardiac failure. The release of excess adrenaline can also cause feelings of fear and ultimately panic, making the situation even worse.

Ayahuasca does not inhibit the breakdown of tyramine completely, allowing the body to continue to regulate it to a degree. As a result, there are no known fatalities as a result of eating foods containing tyramine when taking Ayahuasca, but it is still wise to practice caution, especially for those with high blood pressure or known heart problems.

see further page Diet & To avoid , about food and drugs to avoid before ceremony.
https://icuayahuasca.com/diet-to-avoid/